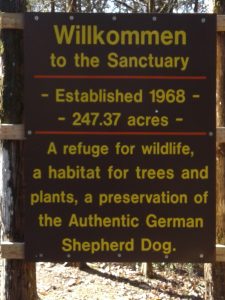 This website is supposed to be about the German Shepherd Dog, however because there is no Governing body for the reproduction of dogs in the United States, thus no requirements for breeders or trainers, and because the American Veterinary system is the worse of any Country, and because the primary dog registry in America is a very low functioning and corrupt entity- the AKC, you should know something about a person who is reproducing dogs, and thus may offer you one.

I will mention that I , Edward Denny, endure and manage severe Post Traumatic Stress Disorder ( PTSD ). I want you to know this as it plays a large part in why I have dedicated my life to the welfare of these incredible animals.    As a young adult I did complete a Bachelor of Science Degree in Criminal Justice and a Bachelor of Science Degree in Psychology from Union College in Barboursville, Ky. I worked for many years in the public sector, however the dogs were always a passion, so in 2009 I resigned from my last employment position to work full time for this Breed.

I began grooming and exercising German Shepherd Dogs when I was a child back in the 1970’s. I would walk several miles every day to do so and this continued thru my teens. In hindsight these dogs helped me get thru my Childhood. I began doing Research on the breed in 1987, with an emphasis on Genetics , behavior, health and medicines associated with the breed.  Having realized that very few so called German Shepherd dogs in the United States were in fact Real, Authentic German Shepherds, and that very few so called breeders and trainers in the United States were qualified to do so, I began breeding and working with German Shepherds in 1991, with an emphasis on improving the breed in the United States. As the Kennel ” Vom Zeder Haus ” began to establish and grow, I realized that I also wanted to educate Americans about this breed, so the research has continued, and I try to share as much knowledge as I can on this website. I have also realized that with the PTSD, these dogs, from a mental and emotional standpoint, have also helped me get thru life. So now I am trying to give back to a breed that has given me so much. These incredible dogs did not and do not deserve what has happened to this breed by unqualified breeders, trainers, the AKC, and greedy, unqualified veterinarians who destroy dogs every day in the Untied States with unnecessary vaccines, heart worm preventative, false diagnosis, and unnecessary surgeries.

Vom Zeder Haus is located on the 247 acre Vom Eichen Wald Wildlife Sanctuary that I also manage. Days  begin at 4:00 am and usually end by 9:00pm.

While everybody does not endure PTSD, life is tough on everybody. An Authentic German Shepherd dog does not need specialized training to provide emotional therapy and support to their Owners, they naturally do that.  So while they require a lot, they give much more in return !!        Thanks for reading.